The Devil in the Grove 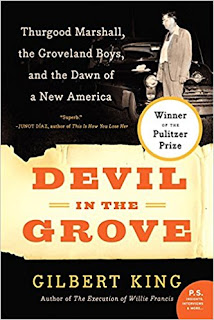 "In 1949, Florida’s orange industry was booming, and citrus barons got rich on the backs of cheap Jim Crow labor. To maintain order and profits, they turned to Willis V. McCall, a violent sheriff who ruled Lake County with murderous resolve. When a white seventeen-year-old Groveland girl cried rape, McCall was fast on the trail of four young blacks who dared to envision a future for themselves beyond the citrus groves. By day’s end, the Ku Klux Klan had rolled into town, burning the homes of blacks to the ground and chasing hundreds into the swamps, hell-bent on lynching the young men who came to be known as “the Groveland Boys.”And so began the chain of events that would bring Thurgood Marshall, the man known as “Mr. Civil Rights,” and the most important American lawyer of the twentieth century, into the deadly fray."

Me, two years ago:
The Devil in the Grove is without any doubt one of the most disturbing books I've read. It left me furious and deeply impressed at the same time. Furious, because it shows what a bunch of violent, racist, unjust, and blind people we are. Impressive, because it also shows how some of us manage to counter such injustices and racism without violence (all the more impressive considering this is not a fictitious story).

Recommend the book for anyone who is interested in civil rights, justice, or just cares for a legal thriller. Not the easiest read, especially in the beginning, but definitely worth it in the end.


Me, today:
Seeing what I wrote two years ago, I can still feel how agitated I felt after reading the book. I decided to re-publish this now, because to me this story is one of the best examples for showing that
(a) fighting for the good actually can make a difference; and
(b) we do have to fight and continue to fight for our rights, for equality, for inclusion because otherwise nothing changes or we'll even lose what we have gained.

On the 25th of November we are casting our votes on a public initiative that undermines what people like Thurgood Marshall fought for. The initiative wants to write into the constitution that the Swiss constitution sits above all international law (except for jus cogens). While this may sound appealing, especially when referred to as an initiative supporting self-determination, it is in fact a clear attack on human rights in general and the European convention on human rights in particular.

This alone should be reason enough to convince people to vote against the initiative. Yet, current polls show that up to 40% of voters will vote for the initiative. In Switzerland, like in other countries, this is the result of a strong 'populist' movement that dislikes everything foreign (except for luxury goods like smartphones, right?). Now, it is easy to refer to all those supporters as 'deplorables' and feel smug about how much better the rest of us are.

Unfortunately, that will not change how these people feel, think, and vote. To ensure lasting change, we have to offer smarter answers to their problems, and while we develop those answers, we have to continue to do what people like Thurgood Marshall did: jointly and peacefully campaign for a better world for all of us.
Bücher English Gedanken 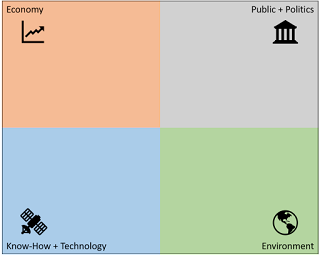 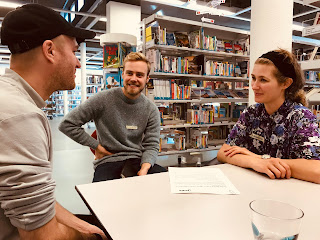